This post may contain affiliate links which means I may earn a commission if you make a purchase through my links (at no extra cost to you). Please read my full dislcaimer for more info.

Imagine if you could learn from communication experts on how to master the art of public speaking through speech contests. Every Thursday, I invite speech champions who have crushed this challenge to share their stories, from competing in their first speech contest to becoming a prominent speaker who can captivate and motivate a diverse audience. If you want to excel in speech contests and become a better communicator, then keep reading to learn how to craft a memorable speech, command a room, and connect with your audience.

Today’s featured champion is Lina Surianto. Lina is a Distinguished Toastmaster, an accountant, and an award-winning speaker. In 2019, she won first place in the District 44 Humorous Speech Contest after many years of competing in speech contests. If you’re interested in learning how Lina prepares for a speech contest and why she says the worst communication tip can become the best, then this interview is for you. 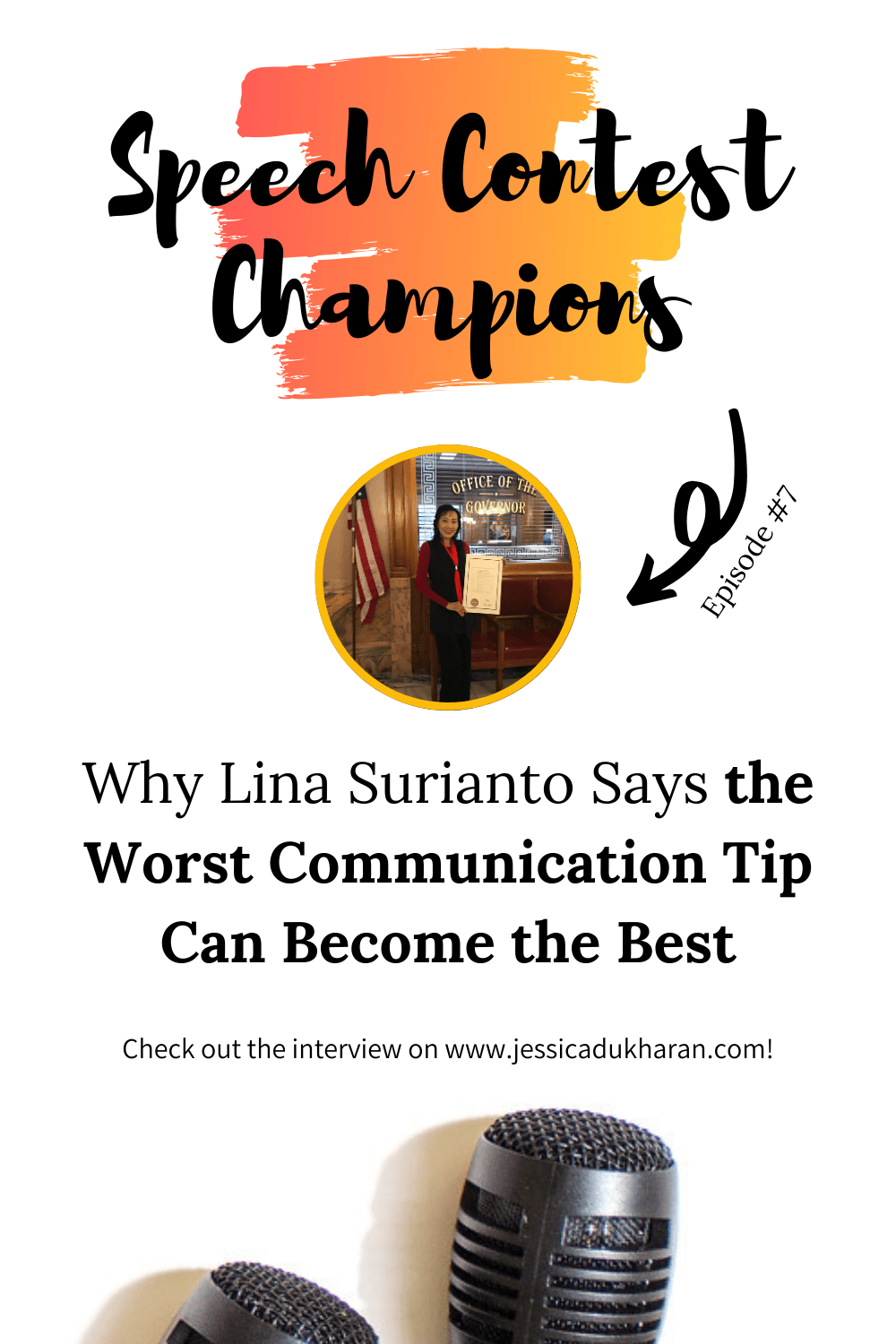 1. Can you tell us about yourself and your line of work?

I currently work for Performance Group in Lawrenceville, GA (east of I-85) but I can’t believe that all my clubs happen to be west of I-85. I am a controller/accountant. I have two Master’s degrees—MBA in Accounting & HR Concentration as well as MAFM (Managerial Accounting & Financial Management). I also have two Bachelor’s degrees in different majors—Behavioral Science and Linguistics & English Literature.

2. Take us back to your first speech contest. Why did you enter it and what happened?

I first entered a contest in 2006, in Humorous Speech, after joining Toastmasters for a couple of months. I was the 2nd place winner in the club, but the first place winner couldn’t make it to the area contest. I, therefore, competed in the area level and won 2nd place from three contestants. It was quite a long time ago but I remember being extremely nervous. Yet, I brought my 5-year old son to the area contest and seeing him giggle and laugh so hard really made me lighten up a bit. It became so worth it competing.

It stretches your ability, from impossible to possible. I initially joined Toastmasters just to get rid of my fear of regret each time someone asked me an impromptu question, but then I got addicted somehow to other things such as leadership roles.

4. What tips do you use to select a speech topic that will be relevant to a diverse audience?

I generally select a topic that is more relevant to myself, my personal experience, so that when I make a joke out of it, it won’t hurt other people’s feelings or it would just be a self-deprecating joke.

5. Take us through your speech writing process. How do you usually create a speech?

When I initially joined Toastmasters, I would write a speech up from beginning to end. I would also get feedback in terms of grammar from someone else so that my grammar doesn’t look odd, especially when I am not a native speaker. Some habit/practice in my own culture may or may not fit the majority of the audience’s language, therefore, it may not be as meaningful to them.

In terms of speech contest, I started to get coaching sessions & evaluations from the past winners, club members, and Champions to see if my speech was good or not. Even though in my advanced club, North Gwinnett Advanced TM Club, I rarely win any best speaker vote, the evaluations that some of the members give me are in-depth and thorough, and that really helped me become polished even more in the speech that I gave. I became the District Humorous Speech Champion in 2019 because I continued to hone my speech through feedback.

6. What are the most important components of a memorable speech (content-wise and delivery wise)?

The most important component of a memorable speech is that it needs to be able to relate to the audience, not YOU, as the speaker. I have done several speeches where I didn’t win, and as a matter of fact, I have lost so many times that I can’t even count anymore…but the reason that I lost is that I didn’t prepare enough. The content was not up to the par of the audience’s mind.

As for delivery wise, it is still a work in progress. At times I can be too animated that it becomes too much for the audience to absorb. I have to control myself more in using the space and am still learning.

I rehearse in front of a mirror and I rehearse in the car on my way to work (it is a 30-minute drive)—it’s a good time to rehearse. I even bought myself a digital watch to time myself so as not to go over timing when rehearsing. To prepare for the District contest, I even bought a wireless mic to position myself and see how I could be better in using a mic, as once I messed up in the District contest (it was in District 14) when my mic wasn’t working well and I lost there.

8. What tips do you use to stay calm, composed, and confident while delivering a speech?

Have you ever heard the term, “imagine your audience is naked?” In terms of humorous speech…I would imagine that so that I can relax more and feel the “funny” in me.

9. How do you usually command a room and connect with your audience?

Eye contact is extremely important. I try as much as possible to lock in eye contact in individual audiences when speaking to connect more with them.

10. Tell us about some of the lessons you have learned from competing in speech contests.

It takes 100 losses to gain only one win. Be patient, and take the time. I lost in countless club contests since 2006 and never even made it to the area after my very first contest (as it happened by chance). There was even one time where I lost five years in a row at the club level and could never make it to the area. But as long as you are persistent enough, you will hopefully get to win one time. For instance, till now, I almost never win best speaker, or best Table Topics speaker, or best evaluator vote in one of my clubs, but it didn’t prevent me from giving speeches or giving evaluations.

The best communication tip that someone has given me is “It is all about the audience, not about me”. Make it relatable to the audience. I have heard this term a lot from the World Champions and also my mentors.

The worth communication tip – “Once again, you are as unprepared as always.” It was the worst as it was very critical (sharp criticism), but it also helped me to rehearse and practice more when it comes to contests. The worst can become the best when you are willing to accept and come to terms with what others comment on about you. There is always a reason why others give you sharp criticism—they don’t like you and want to find ways to get rid of you, or they can’t stand you as you make too many mistakes, but it also means that you can polish yourself to become a better speaker.

12. What tools do you recommend using to prepare for a speech contest?

Get 2-3 people as your coach, get someone else that you can work with to coach you through your speech. Always ask for feedback—if different people give you different feedback that can be conflicting, choose the ones that you are willing to accept. In my winning speech, everyone else who met me at the contest asked me to change one of the phrases that I used, but one Champion told me it is okay to use that. I chose his advice and won the District contest. Therefore you can be gambling on what you think is best, but overall, you make your decision. I have in the past sought help from some World Champions of Public Speaking as my coaches, such as David Brooks from Texas, Darren La Croix, Mark Brown, and Lance Miller.

13. Where can we find you and link up with you?

You can either email me at lina@tmlina.info or find me on social media such as Facebook or LinkedIn under my full name: Lina Surianto.

Are you planning to compete in a speech contest? If so, which of Lina’s tips do you plan to use to prepare for it? Share your answers with us in the comments below!

No comments yet. Why don’t you start the discussion?